skip to main | skip to sidebar


By Jody Worsham,and yes I co-authored "Kin We're Not Related To"


All rights reserved for Dog Whisperer


Yes, it was that time of year again...The Great Pet Costume Contest.  Still glowing after the Funniest Costume win with the nine-year-old, I wanted more, and this time there were actual prizes.

Last year, Pork Chop, son of Tia Mia, won First Place in the Lite Weight Division AND over all GRAND CHAMPION as "Taco Bill" wearing my original homemade Taco costume.  This year it was up to his mother to carry on the winning tradition.

Now to win, you have to be clever, stand out in the crowd, and be unique.  I had an idea but first I had to create a helmet for a dog.  Shih Tzu’s have a small head.  I thought about those green Styrofoam balls you stab artificial flowers into, but those were costly and they had to be hollowed out.  I searched the house for something round.  Cereal bowels were too heavy, no time to create a paper mâché helmet, tin foil would bend, and cardboard required many small cuts between the cardboard ribs and then it would only bend one way.  Like Thomas Edison, I discovered many ways not to make a Shih Tzu helmet.


Then beneath the kitchen sink, I found the Cone of Shame Tia had once worn when she had a hurt paw. It fit, but it needed to be round.  I tried twisting Wal-Mart sacks (we have a lifetime supply) around the base of the cone to build it up.  It had the shape, but would need something to cover the sacks.  Felt was too stiff.  A white tee-shirt in the Not-Ever-Going-to-Wear-This-Again-but-Too-Good-to-Trash pile caught my eye.  It was soft, pliable, and it was white.  However, the twists in the Wal-Mart sacks showed through.  I settled on some batting left over from quilting.  All the helmet needed now was some gold duck tape around the edges, and a rounded visor I covered in gold duck tape.


With the helmet out of the way, it was time to tackle the air tanks.  I had bought two extra two liter bottles of root beer and Dr. Pepper for the previous Scuba Zombie costume.  I instructed the two kids to empty the contents, which they eagerly did.  Tossing me the empty plastic bottles, the hyper children ran outside to chase the squirrels.  I sprayed the bottles white then added pieces of red plastic and strips of orange construction paper to the opening of the bottles to represent flames.


I printed out two American Flags and glued those to the tanks.  All that was left was printing the name on the helmet and Astro-Mutt was ready for a win.  And WIN she did. 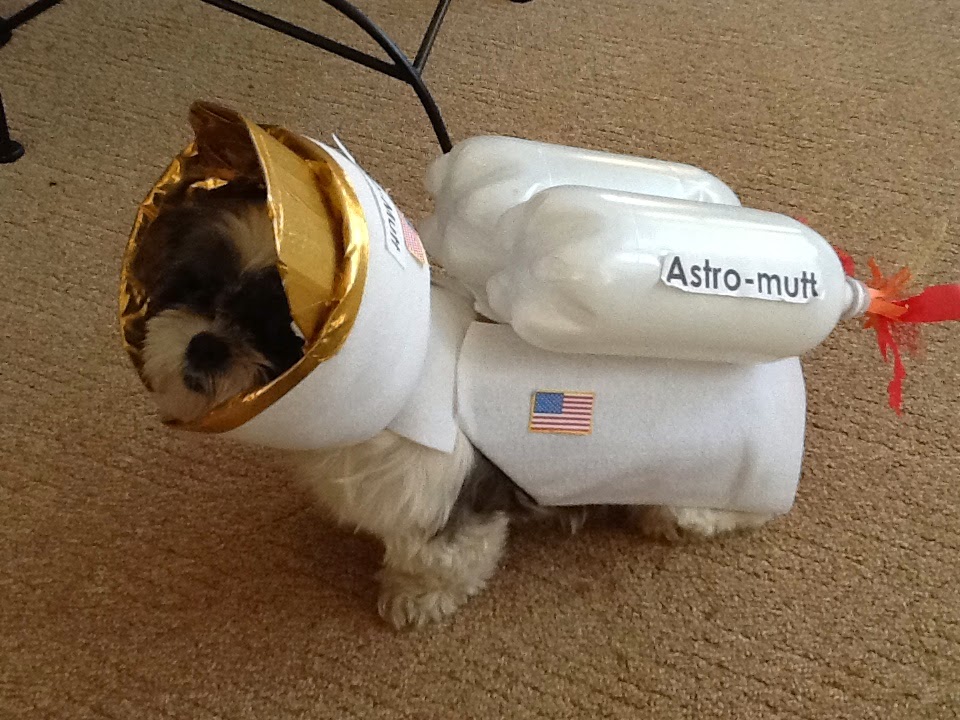 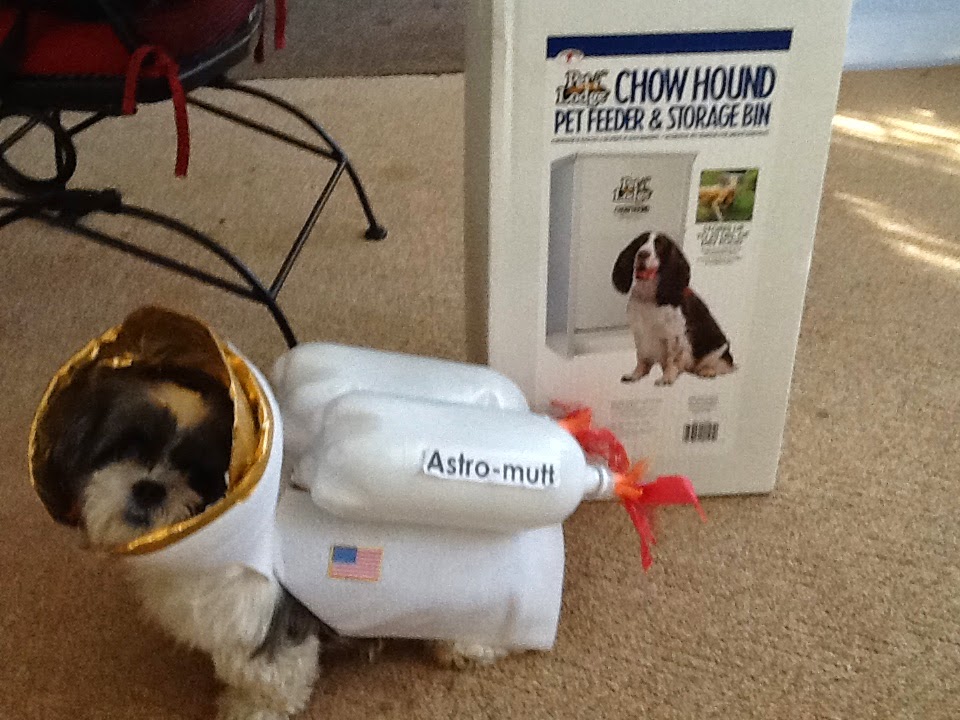 This doggie did do it, and yes, therapy will be required.
Posted by Jody Worsham at 6:00 PM

So clever and cute.
I can't imagine doing that much work.

You are a woman possessed.

Jody Worsham
I have always been an overachiever so no one was surprised when my husband and I adopted six children (not all at the same time). Then later, just before we retired, we adopted two of our grandchildren and I began to write humor. It was cheaper than therapy, legal, and it didn't matter if Medicare covered it or not.