skip to main | skip to sidebar


All rights reserved for doubloons

Every kid wants a gold fish.  The parents buy two or three and get an aquarium.  In a month or so the kids lose interest.   The fish die and you flush. End of story.  Oh, there is the occasional funeral and even a rare commercial for Mr. Gold, a fish, who did not have life insurance but for the most part it is not a big deal...until now.

Two years ago the nine-year-old wanted gold fish.  For her birthday I got the aquarium, filter, light, bubbler, and three gold fish.  The first two followed the traditional path, died within two days, and were soon flushed.  She wanted replacements.  What the heck, at 18 cents a fish I could afford to be generous, so I bought two replacements expecting all to be over within a month.

When the fish were four months old, I had to find solid food weekend feeders for them as we were going away for the week-end.  When we planned a week long cruise, I had to search all over town for three somewhat expensive seven-day solid food feeders for the now one-year-old fish.  When we returned I half expected to have to flush some skinny fish.  Not so.  They were thriving.

When I mentioned this to my friends they said "What, you didn't have the one way valve connectors for the bubblers?  Man, you are lucky the electricity didn't go out while you were gone.  You could have returned with ten gallons of water syphoned out onto your carpet and some smelly
fish."


Before our next trip, I bought the one way valves for the bubblers which were not cheap.

At two and a half years old, the three fish are still alive and have grown to be five inches long lips to tail fin.  Every time I pass by the aquarium, I swear they are laughing.

Night before last, the eleven-year-old came running into the bedroom.

"You've got to help me.  Margarita (I swear I don't know where she got that name although I could have used one right then) is being beaten up on by Tiger Eye and Goldie Locks.  They are pecking on her (I thought only birds pecked) and pushing her up against the glass.  You've got to do something."

My first thoughts were of an old cheer we used to do when we played John Tyler High School in football.  FLUSH THAT JOHN!  FLUSH THAT JOHN!  But knowing how tender hearted she could be when it came to dumb animals...and fish...I went to see what was happening. 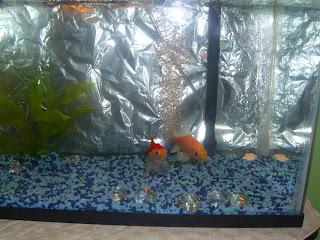 Sure enough, Tiger Eye and Goldie Locks had it in for Margarita.

"You've got to rescue Margarita." The only thing I had big enough to accommodate Moby Dick was my cut glass punch bowl, not exactly what my mother had intended it for when she gave it to me.
Nevertheless, we filled the punch bowl with dechlorinated water and moved Margarita into her new condo.  She did have a few scales missing and was listing a little to the left; Margarita, not my mother, although my mother does that, too, from time to time.

"She should be fine," I said as I eyed the toilet.

"What about a bubbler?  She's going to need air."

"She will be alright tonight. In the morning I'll get a multiple connector for the pump.  Now go to bed."

The next morning I got up early to do any necessary flushing in case Margarita hadn't made it.  She was laughing at me on her side.  The bubbler that at been in the aquarium was in the punch bowl and my daughter's alarm had been set for midnight.  She had been switching the bubbler from one tank to the next all night.

I bought the multiple connector at Wal-Mart.  Last night we tried putting Margarita back into the aquarium with the bullies.  Nothing had changed. Margarita went back into the punch bowl.  At least there would be no switching bubblers back and forth during the night.

I set up the aquarium and all the gear. I put Margarita in her new single digs.  She straightened right up, swam around, and I swear, smiled at me.

The relief on  my daughter’s face when she arrived home from school and saw Margarita swimming happily  in her very own ten gallon tank was worth all the trouble and expense to me. 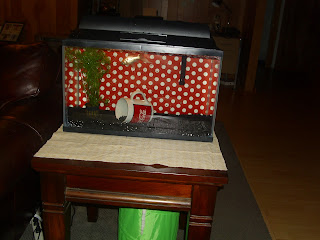 However, later  while looking at the sales slip, Dr. Hubby commented "Now I know why they are called Gold Fish."

"You better hope she takes as good a care of us in our Golden Years as she does these Gold fish."

"Good point.  Maybe you should get a waterproof TV  to keep Margarita entertained.  After all, we want her to be happy."
Posted by Jody Worsham at 4:27 PM

Ha... love it! In a tank with four fish, I had one that lived to 7 years old... by the time he got older, I had to sling a hammock in the tank (cheesecloth) because he spent so much time on the ground, the rocks were damaging his scales... the hammock didn't do much better, but I swear I kept him alive longer... he was a beauty! Cheers~

Jody Worsham
I have always been an overachiever so no one was surprised when my husband and I adopted six children (not all at the same time). Then later, just before we retired, we adopted two of our grandchildren and I began to write humor. It was cheaper than therapy, legal, and it didn't matter if Medicare covered it or not.